BACK TO THE POULTRY MAIN PAGE

Per Sand Hill Preservation Center:  Erminettes (AMB):  Our now deceased friend, Ron Nelson, discovered this old breed some years back while travelling through Wisconsin. He obtained some hatching eggs and spent many years trying to get them back to their original status. Ron passed away a few years ago and his flock was maintained by a friend, Josh Miller, in a nearby town. Josh gave me a call last summer and indicated that because of numerous circumstances he could no longer maintain them. I was very impressed with them when we visited Ron the year before he died, but he just wasn't comfortable in parting with them at that time. Ron was a perfectionist. After Josh called, Linda and I went on a long day trip and brought back 22 birds. Many of them were from Ron's pens. We are hopeful to start offering them either late in 2014 or take orders for 2015. The internet is full of incorrect pictures so please use discretion. There is an erminette color and an Erminette breed. They are basically a white chicken with either black or orange flecks in the body feathers. They are a large breed that lays a pale brown egg, not totally perfected, but historical. They are excellent foragers. At this time we are only interested in placing them with serious folks who want to perpetuate the breed. Send a letter of interest and when the chicks become available we will share. We are planning to charge $5.00 per chick. We will be saving all of the chicks from the first part of the season and hope to have some by July 1.
Bantam Breeding and Genetics - Page 183
books.google.com/books?id=TRxBAAAAYAAJ

Fred P. Jeffrey - 1977 - ‎Snippet view - ‎More editions
Erminette There is no Erminette Bantam but one could be made from the large Erminette should an enterprising breeder decide to do so. Hutt (1964) established the genetic basis of this pattern: In typical Erminettes the plumage is variegated, ...
====================
The Poultry Monthly - Volume 22 - Page 133
books.google.com/books?id=zNJJAAAAYAAJ
1900 - ‎Read
AN ERMINE WYANDOTTE.
BY GEO. H. BRACKENBURY.

I believe that it was Clarence J. Reddig, of Shippensburg, Pa., who originated a strain of Erminettes with rose combs, and I think it was he who gave them the name Erminette. A year or two later, certain, Massachusetts breeders were booming Single Comb "Erminettes" (?). There have been differences of opinion as to the comb an Erminette should wear ever since that time, and it is owing to this difference of opinion among the breeders of the Erminette, that they are not now in the Standard. I believe that those who favor the Single Comb, also favor feathers on the legs, but I am not certain as to this. Those who breed them with rose combs, prefer to breed them with clean legs. Were I to take them up, my preference would be those with rose combs and clean legs, and I would breed them as near to a Wyandotte type as I could, by the infusion of White Wyandotte blood. In fact, I would make an Ermine or Ermine Wyandotte. The Erminettes, as they were bred by Mr. Reddig, were quite near to a Wyandotte in type and it is a wonder to me why they were not given the name Ermine Wyandotte when first brought out.

I have known of several large flocks of Erminettes not more than two or three miles from my residence, and one in particular, about six miles away, that were of splendid Wyandotte type, and perfectly marked, with the purest of white ground color. I was so pleased with the appearance of his flock of ermine-colored fowls, that I turned my horse and drove in to see them. The owner was pleased to give me his method of breeding. He said he had bred them for several years, and liked them very much. He had originally bought the eggs of an Erminette breeder, and had bred them several years until he felt the need of new blood; not knowing where to secure new Erminette blood, he had introduced White Wyandotte blood through the male a few years previous, and bred on up to that time (about five or six years ago). By the infusion of the White Wyandotte blood, he had secured great uniformity of combs (all rose combs), splendid Wyandotte type, and had, perhaps, lightened up the general appearance of their plumage; there were just enough dark feathers, dotted here and there among the white, to make their appearance most pleasing, and they came nearest to the real ermine color of any flock of Erminettes I have ever seen.

It seems a great pity that there is no fowl of this color in the Standard. I would suggest to those who are breeding these fowls with rose combs, that they introduce the White Wyandotte blood; in reality, makes an Ermine Wyandotte. The name would be most appropriate, and the birds as charming as any other variety of Wyandottes to the true fancier. I am sure there can be no one to object; perhaps I would better put that a little differently, and say that there ought not to be any one to object to a fowl having the ermine plumage and Wyandotte type. We have given the key, now will not some of our experimenters who are breeding Erminettes, produce a Wyandotte of the above description?
=============================
American Poultry Advocate - Volume 26 - Page 129
books.google.com/books?id=jCtJAAAAYAAJ

(D. VV. R., Ohio): Erminettes are the result of crossing the Spangled Game with the Light Brahma and White Cochin. At least those were the breeds used in the specimens first exhibited at Hartford, Connecticut, in 1872. They have cropped out from time to time in our exhibitions, sometimes being shown with smooth shanks, and sometimes with shanks feathered. They have never been satisfactory enough to secure them to become completely bred. Single comb, white mottled with black, and shanks feathered, was the character of those first offered for exhibition. There is nothing in them to recommend as being better than the old-fashioned Spangled Game fowls.
===============================

Pages 42 and 43.
"At one time a breed called the Erminette was developed with the colors of the modern Ancona and Houdan
reversed (white with small black tips and flecks), which were not as regularly distributed  as in good
specimens of Anconas and Houdans, yet presented some regularity."
===============
Principles and Practice of Poultry Culture - Page 602
books.google.com/books?id=ML5BAAAAIAAJ

John Henry Robinson - 1912 - ‎Read
Page 520
"A variety called the Erminette, white with black spots in the plumage, the converse of the Houdan,
was at one time bred in America, and there may still be some in existence." 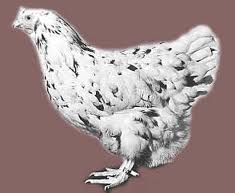 The Erminette is a breed that has an interesting and confusing history to say the least. Some people claim that the Erminette looks like an Ancona, others say they looked like a Delaware. According the poultry history buffs as well as the world's leading poultry history guru Craig Russell of Pennsylvania, the Erminette was originally white with random (preferably solid), black feathers. Here is a picture of an Erminette from the early 1920's.

By the 1950's-1960's the breed was considered extinct, but was assumed that the breed was in existance somewhere in the hands of a family that was "under the radar". Ron Nelson had one of the largest rare breed flocks in existence in the nation and was always eager to hunt down important flocks. He was driving in southern WI one day and happened to notice a flock of chickens that looked like the old "extinct" Erminettes roaming the farm along the country road he was traveling on. He stopped, went to the home and was met by an elderly woman. Upon asking about the birds, she shared that they were Erminettes and once belonged to her grandfather, who passed the flock to her father, who in turn passed the flock to her. He took home some eggs to hatch, and so started the restoration of the Erminette.

Ron was a perfectionist, and therefore refused to release these birds to anyone until he had bred them to their historical glory. He did bring in some Black Orpington blood to boost size and reduce inbreeding. He also experimented with creating a Red version of the Erminette by outcrossing to Buff Orpington. Unfortuneately, Ron passed away before sharing these birds with anyone, and his sister sold off his entire flock without getting Ron's rare collection in the hands of individuals who would maintain them. Many of his rarest breeds were lost entirely! However, it was later found out that a man who worked for Ron (Josh) had managed to obtain some of these birds from Ron. When he was no longer able to take care of them he contacted Glenn to make sure the birds weren't lost completely. Glenn obtained both the Black and Red varieties of the Erminette. Keep in mind, the traditional type was the Black version. However, I have seen both of these varieties in person at Glenn's place when I was working with him on the Iowa Blue, and they are stunning birds!

Hope that helps clear up some of the misconception on the breed. 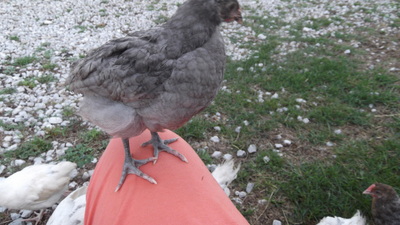 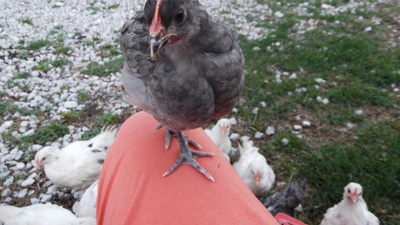 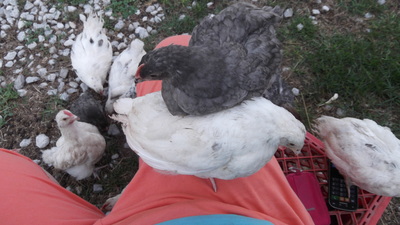 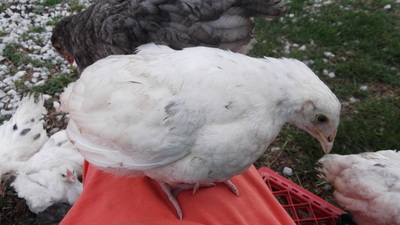 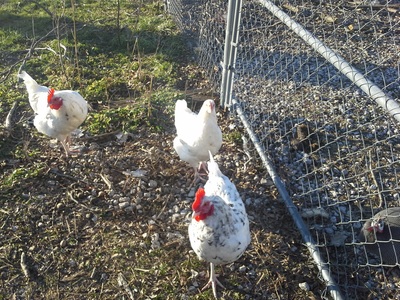 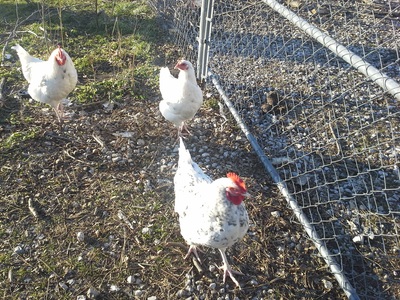 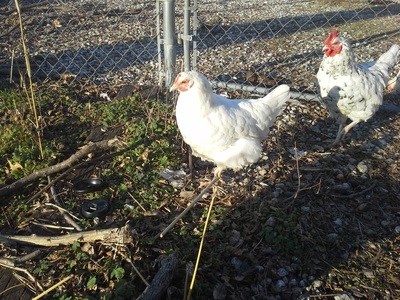 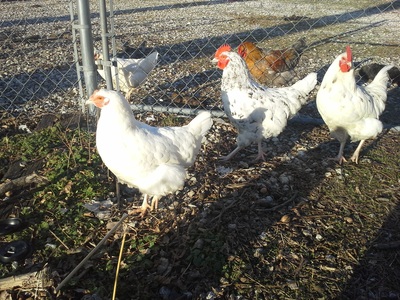 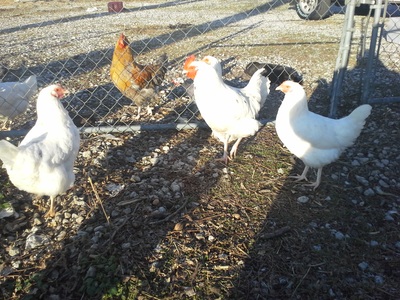 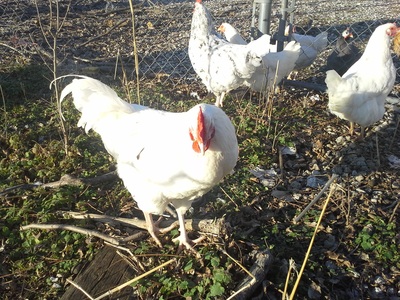 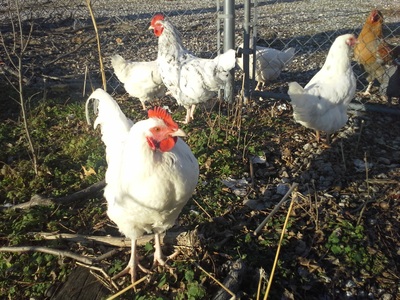 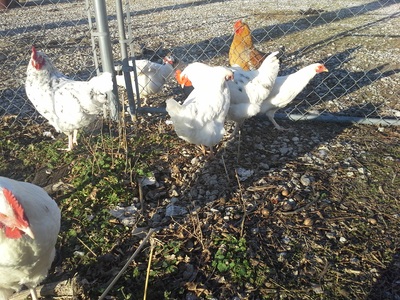 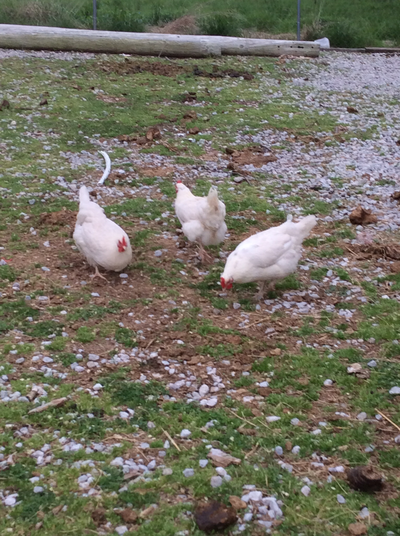 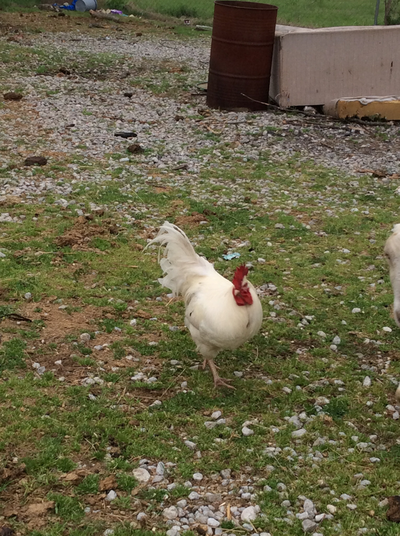 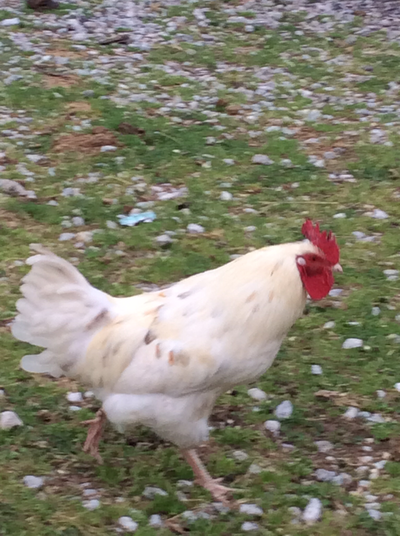 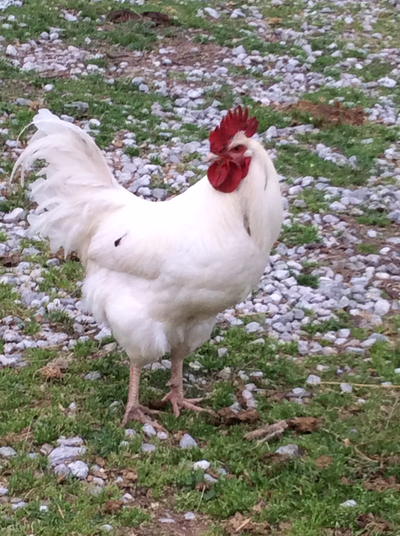