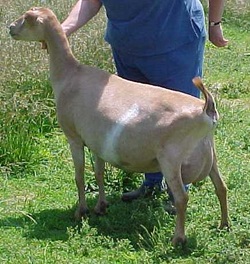 Pansy Peachi Kean has several DHI records in the top ten list and has many BDIS wins. 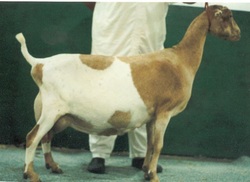 
Madi Gras 2*M is the all time record holder for Protein in the LaMancha breed, with milk records of over 4000 lbs of milk, and if that wasn't impressive enough, she has over 20 GCH wins as well as many BDIS wins and BUIS.
As taken from the Nickel's website:  "GCH Pansy Peachi Kean 3*M 1997 is Mardi Gras' daughter by Windstar Custom Design. In 2001, Peachi was 2x BIS 5xBOB 6x1st 1x2nd. Milking through , after not freshening in 2002, Peachi continued to please going BOB 4x Best Udder 3x GCH 4x and RGCH 2x. placing 1st 5x 2nd 4x. Peachi was 5th for Milk, 4th for Butterfat, and 4th for Protein as a three year old in 2000 and broke the all time record for butter fat in second place behind her mother. Freshening as a four year old 2001 She stood First in the Nation in butter fat and Protein, and 2nd to her half sister Gala in milk on the breed leader list! There is a lot of satisfaction in hearing judges comment that she is a most nearly perfect illustration of the score card. Her HES scores as a 4 year old were 94.1(96 96 91 92) Excellent with 15 areas code 1. Harvey Considine said that was the highest score he had ever given and that she was the nicest doe he had ever had the privilege to score. (Yes, we had him say it twice!) Her mammary system remains unchanged--high and tight with a remarkable attachment all around. Top Milking LaMancha 4 year old, Lincoln's littermate sister, WI State Fair and 2nd milking 5 year old to Lexus in 2002 shows us her will to milk.. Owned and shown by our nephew Aaron Einsiedel, Peachi is eligible for an ADGA youth award as well.. ALC awards 1998 Silver milk and Gold fat, 1999 Gold for milk and fat, 2000 Gold for Milk and fat. 2001 Gold Milk and Fat. Grand Chanpion and Best of Breed 4x at seven years of age, and #4 in the nation for production as a six year old, Peachi remains a competitve part of the show string and demonstrates the will to milk as well. 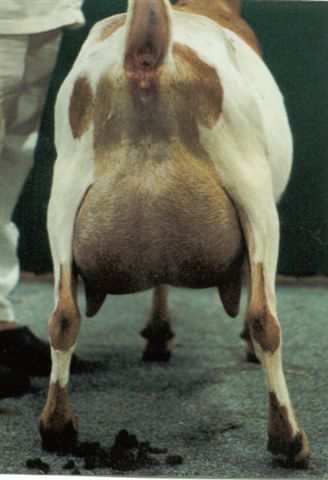 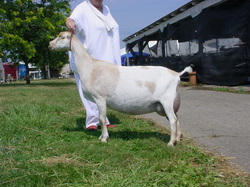